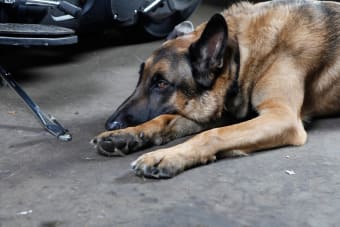 Antifreeze poisoning is one of the most common forms of poisoning in dogs due to the fact that it is a common household item. Here, our Kittrell vets explain why you need to get the vet right away if you think your dog has ingested antifreeze, and how to help prevent if from ever happening.

What should I do if my dog drinks antifreeze?

If you think your dog has ingested antifreeze, get to the veterinarian right away. Your veterinarian will be able to safely administer antidotes to the poison to prevent further absorption of the toxin in your dog's body.

Antifreeze poisoning can be treated effectively if given quickly after the consumption of the antifreeze. Your dog may have to stay at the vet in their intensive care unit to prevent kidney failure.

How do dogs get antifreeze poisoning?

Antifreeze poisoning is one of the most common types of poisoning in pets and typically occurs when the liquid leaks out of your car's radiator. Dogs are attracted to the taste of the antifreeze and will lick it off the ground. Another way dogs may ingest the toxin is from the toilet bowl in homes where antifreeze is used to winterize pipes.

Why is antifreeze lethal?

The toxin, ethylene glycol, is what makes antifreeze lethal. Dogs can consume great quantities of ethylene glycol before being repulsed by its aftertaste, and by then, it's too late.

It only takes a small amount ethylene glycol to cause fatal damage to the brain, liver and kidneys. In fact, less than three ounces of antifreeze is enough to poison a medium-sized dog.

How can I prevent antifreeze poisoning?

The best way to avoid antifreeze poisoning in your dog, is to follow a few simple precautions:

If you think your dog may have ingested antifreeze, contact our Kittrell vets immediately! If we have closed for the evening, contact your nearest emergency clinic.

Welcome to Our Veterinary Clinic!

At Kittrell Animal Hospital we operate as a walk-in clinic for cats and dogs, so if you require veterinary care, call us to inform us you are on your way. We look forward to meeting you and your pet!